Celebrating another Dickeyville published author!  We recently learned about a second publication by long-time resident, Mel Currie. Mel’s latest book, Just Before Too Late, was released in December, 2019.  This fictional account of Paul McCarahan adds to an earlier non-ficition publication by Currie; Mathematics: Rhyme and Reason (MSRI Mathematical Circles Library,) November 30, 2018.  Summaries of both are provided below.

Just Before Too Late. Paul McCarahan has killed twice. The first time it was in Germany, his Afro-German mother’s country. The second time the theater was Pittsburgh, his hometown. The latter killing made him something of a hero to the local African American community, from which he nonetheless has drifted away. However, it is the violent struggle in the Rhineland when he was nineteen years old that has marked him, apparently for life. This “victory” remains his dark secret. He muses that it might be his guiding light.Paul and his younger brother lost their mother, when Paul was four years old. She returned to Germany due to the psychological abuse meted out by Paul’s father and, fearing her husband’s threats, did not return to retrieve her children. Paul was conceived in the immediate aftermath of World War II. Fifty-eight years later, he is a mathematician struggling to find life’s formula. He is at a loss wherever he wanders, be it Germany, Yale College, or the Piedmont region of Virginia and North Carolina, where his paternal ancestors labored in bondage for two centuries. He eventually gives himself up to the possibility of redemption, when fate presents itself in the guise of a manifestly long-shot relationship.

Mathematics: Rhyme and Reason is an exploration of the aesthetic value of mathematics and the culture of the mathematics community. This 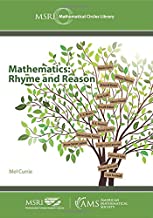 book introduces budding mathematicians of all ages to mathematical ways of thinking through a series of chapters that mix episodes from the author’s life with explanations of intriguing mathematical concepts and the stories of the mathematicians who discovered them. The chapters can be read independently, and most require only a background in basic high school algebra or geometry to appreciate the topics covered. Part personal memoir, part appreciation of the poetry and humanity inherent in mathematics, this entertaining collection of stories, theorems, and reflections will be of interest to anyone curious about mathematics and the human beings who practice it. In the interest of fostering a greater awareness and appreciation of mathematics and its connections to other disciplines and everyday life, MSRI and the AMS are publishing books in the Mathematical Circles Library series as a service to young people, their parents and teachers, and the mathematics profession.

Both books are available for purchase on Amazon.