Dickeyville is a village of artists. It was such a pleasure to showcase some of them and their work at Dickeyville’s first Fall Arts Festival, held during September 21-23rd, 2018. What a success it was! There was a wonderful sense of celebration as residents, their families and friends came to all three sessions in great numbers.

We had a super committee (Anne Puckett, Mary Scarpa, Phoebe Hayes, Mike Blair and Amy Fantz) and sincere thanks must also be extended to Patricia LaNoue, who declared the festival open with a superb speech. Apart from focusing on the importance of creativity and the imagination, Patricia also gave an engrossing introduction to the work of Magill Mackle, a noted Baltimore muralist, who settled in Dickeyville in the mid-30s and acted as a catalyst to the development of this special place.

The talented Cymans and Cara Detweiler gave us much delight at the Opening with their tuneful melodies and harmonies, while Richard McCready brought the festival to the close on Sunday with his guitar playing and range of folk songs. 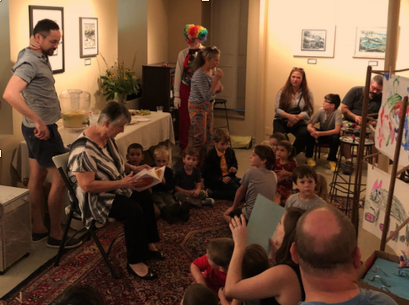 For so many the highlight of the three days events was the presentation on Saturday afternoon of imaginative and colorful paintings by children of the village. The event also included an appearance by Marco, the clown, and readings by Joan McCready of children’s stories. Not only did many residents attend the weekend’s events, they also bought Sam McCready’s paintings in the silent auction so that we were able to donate $3,000 (!) to three good causes, including the Dickey Memorial Church.

With the success of this first Fall Art Festival, we hope it can become a regular feature of the Dickeyville calendar.

About the author Joan McCready