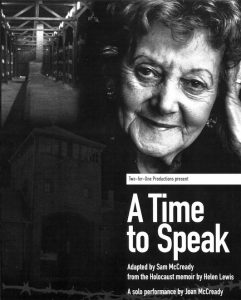 next month for an Irish tour of the play, “A Time to Speak,” adapted from Helen Lewis’s Holocaust memoir, Joan McCready will give a performance in Mark Luce’s Studio, on Friday, March 31, starting at 7.30pm.

Joan’s performance, which has been seen in a number of venues in the US and UK, has won universal praise from audiences and critics alike.

Admission is free. All Dickeyville residents are invited but the audience will be limited to 25 people, allocated on a first-come, first-served basis.

About the author Sam McCready