Unlike many neighbors who grew up on the East Coast and have roots in the Baltimore-DC area, Micah DeBruno comes to us from afar.

He and his several siblings grew up in a small coastal town in central California where yes, he did indulge in surfing. The children were home-schooled by their mother, who excelled at teaching core curriculum and instilled good values including a love of independent learning. 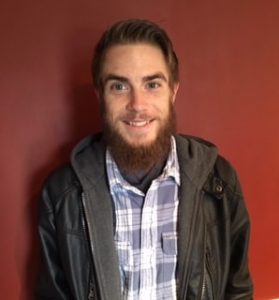 A switch to public high school was easy academically but challenging socially. Joining sports teams (football and pole vaulting) proved a good way to face the challenge and create a place in the existing social hierarchy.

At the end of high school, Micah had no clear plans of his own and decided to follow a buddy who joined the Air Force.  He spent spent four years in the Air Force including a deployment in Afghanistan.  No, Micah can’t fly a jet, but he is an excellent generator mechanic. (Something to remember when the power goes out!)

The military experience yielded many good friends and offered some excellent financial support programs including school tuition and the VA loan that helped Micah buy his perfect home on Pickwick.

After discharge from the military, Micah decided it was time to get serious about having a life plan.  His goal is to become a computer programmer developing video games.

He was drawn to Baltimore by the excellent program at UMBC in computer science and game design.  He is already a year into the program and is impressed with the basic math and programming skills that he’s learning – clearly a good basis for the more sophisticated curriculum ahead.

Micah enjoys daily jogging, playing video games (not surprisingly, an upstairs room is devoted to that activity) and brewing his own beer.  His love of beer is seen in the impressive collection of mugs and glasses he has on display in the living room.

Micah has some of that California laid back attitude; he is not a long-term planner but will finish school and see what turns up in his life.

Meanwhile, he plans to enjoy the secluded feel and active social life of Dickeyville – you may have seen him already enjoying the New Year’s Eve progressive party.

A devoted beer drinker, he has noticed that wine is prominent at Dickeyville social gatherings.  He thinks he may try some now that he’s here.