Andrew grew up as the oldest of four children in a large house in a wooded lot off Falls Road in Lutherville.  He was ready to move on to his own home last summer and clear that he wanted an old house with personality.  He conducted a diligent search and had a strong contender in Ellicott City that fell through – then a tragic fire consumed the family home in Lutherville and sped up his timeline. 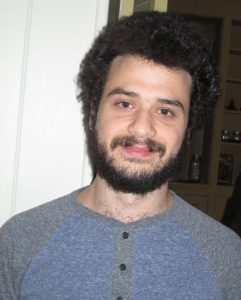 Andrew and his parents all fell in love with the little row house in Dickeyville that no one else seemed to want.  They pooled their resources and in a team effort, got the floors sanded and stained, the birds evicted from the chimneys, a leaking cast iron pipe repaired, the radiators tuned up, the yard cleared (Mom Carol likes to garden; Andrew not so much) and the patio restored; so that Andrew could move in last August

He loves the size and layout of his house including the secluded feel of the back yard and his glimpse of the dam from his upstairs bedroom window.  Although he describes himself as a loner, Andrew likes the idea of having neighbors and meeting dog walkers on the streets of Dickeyville.

Andrew currently works as a case manager at Humanium, a community mental health program in Columbia, where he is a key player in management of the psychiatric day program that provides meals, group therapy and activities to about 40 clients.

He describes his main qualification for his job as “being able to explain things in a way people can understand”. The job is busy, demanding and stressful and is not likely to be his “forever” choice.

Andrew has a passion for fantasy sports and would love to get involved as a writer or blogger in performance analysis and prediction of fantasy team results.  This is currently a hobby but could become a source of income in future.

Meanwhile, he also has a number of other eclectic hobbies and tastes.  He will not waste his time on Facebook or other modern social media (doesn’t have cable or own a laptop) but he is an avid reader and loves old movies and TV shows with which he creates his personalized entertainment stream directly into his home. 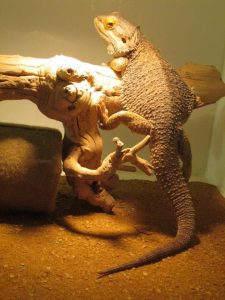 As for pets- Andrew says “I’m not a mammal person” but he has an affinity for reptiles, which occupy several terrariums in his home.  These include some Blue Tongue Skinks expected to reproduce in the spring and “Reptar”, a striking bearded dragon and favorite specimen, as seen in the accompanying picture.

It will be a delight to have this interesting young man living among us.  Please welcome Andrew Garinther to Dickeyville.