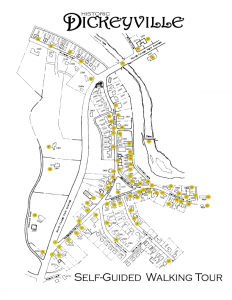 Do you want to take a walk through the quaint, cozy village of Dickeyville? You can follow the labelled map with a detailed account of various homes and building of interest. Estimated time = about 1 hour.

View or print out a copy of the Walking Tour of Historic Dickeyville V3. 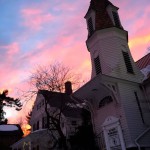 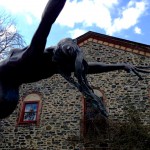 The tall stone-built house, built in 1872 in the General Grant style is the former warehouse for the mills [44].  It was restored as an art studio for noted Baltimore muralist, R.McGill Mackall (his mural may be seen in the former Baltimore Sun building in Baltimore).  Mackall bought the property in 1932 and had it gutted, leaving a 45-foot square shell with walls 37 feet high—an ideal space for a muralist. He knocked down an adjacent property and used the materials to build a 3-story home inside the building so that he might live and work in his converted warehouse.  The property has been occupied ever since by artists.  Work by the current owner, sculptor Barry Johnston, is on display in the yard.

Arguably, the most impressive home in the village, Ashland Chapel [18] built on land given in 1848 by the Wethereds, a Quaker family, as a house of worship, a school and a library for mill workers. It was converted in the 1960s into a charming home by Barbara Holdridge, founder of Caedmon Records, which produced Spoken Word and Ethnic Music recordings. It continues to be a private residence.  It is easy to see the building’s origins.  Even the steeple has been preserved as a separate structure on the grounds.  Also to be seen is one of the waiting stations for the trolley, which ran through the village.  You will notice a number of hitching posts in the village.  These are purely decorative and were added when the village was gentrified. 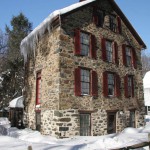 The distinctive, tall, four-story stone house [8] was built in 1848 by William Hendrick.  Enos Humphries, a founder of the local chapter of the Independent Order of Oddfellows (IOOF), lived here.  The house is unusual with its central chimney and four stories, with two rooms on each floor—and the attempt to make the local rubblestone look like dressed blocks—it is one of the most distinctive homes in Dickeyville. 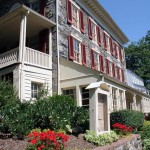 Gratitude to Sam McCready for collating written material for the Self Guided Walking Tour.