It’s widely known that the golf tournament element of the annual Dickeyville July 4th celebrations had been historically organized by our beloved unofficial Mayor of Dickeyville, Peter Auchincloss. 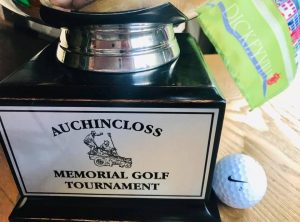 After Peter’s tragic sudden passing in 2018, it was an automatic decision of the village golfing community to rename this tournament the Auchincloss Memorial. In the spirit of Peter’s love of coaching youngsters as well as his legendary infectious enthusiasm, junior and adult beginners “come and try” sessions were added to the golf tournament program for the 2019 Dickeyville by the Bay, July 4th celebrations.

To mark the occasion, Matt Reaves and Jess Stephenson Reaves took the “somewhat tired” old trophy, and reconditioned it to its new gleaming glory, and worthy of honoring Peter’s memory.

The Cyman, Wharton and Mims-Shepard families ensured a healthy attendance of juniors, first thing on Friday July 5th at the Forest Park Golf Course practice facility. The next generation of Tiger Woods’ & Michelle Wie’s hit drives, iron shots and sank putts galore, during a full hour of golf. Thanks to the First Tee of Baltimore for use of junior clubs and equipment, but particular thanks to Mitch Cyman and Matt Reaves for helping with the youngsters. Keep your eye’s peeled on future LPGA & PGA golf tours for those names! 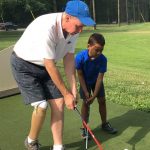 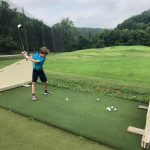 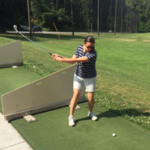 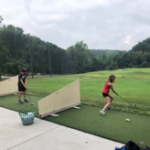 The adult beginner session saw a few late call-offs but Amy Cyman and Jess Stephenson still impressed with some awesome skills, as they summarily struck golf balls all the way to the perimeter fences of the practice facility.

As the concluding Auchincloss Memorial tournament loomed on the Forest Park course, you could feel the tension building among the entrants! 10 players in 3 groups tee-ed off in hot steamy midday conditions. The groups were:

In addition to the glory of the new trophy being held for the year by the winning group, there were individual awards for:

Amazingly, all three individual awards were won by Mat Coughlin, a guest of Dickeyville’s Matt Reaves. Mat’s prizes were all imported from the home of golf (Scotland), but their combined value definitely didn’t trouble his amateur status! Congratulations Mat.

As often happens, the scramble format being played encouraged some good scoring from all groups with birdies, and pars a plenty! Most of all however, golfing FUN ensued, and rumor has it that (in true Auchincloss style) an adult beverage or 2 may have been partaken of, throughout the afternoon!!!!

A massive gallery of spectators (3!) applauded the groups onto the concluding 18th green, anxiously awaiting the scores and prizegiving in the clubhouse.

Third place was secured by the trio of Sally, Clint and Mike, with the runners up spot won by Mitch, Chris, Mat and Garland. Winning the Auchincloss Memorial trophy for the first time, and coming in with an “Auchincloss-esq” score of 61 (ten under par) was the team of Matt, Keith and Dave. 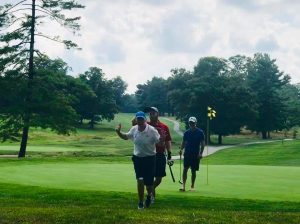 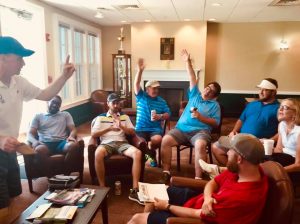 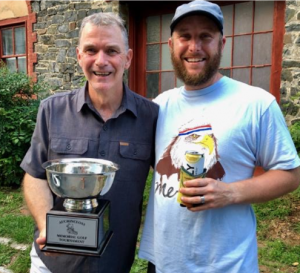 A great day was had by all and the shiny trophy was presented to Matt Reaves, captain of the winning team at the Dickeyville By the Bay dinner dance on Saturday night.

For Dickeyvillians, Peter’s memory will always be in our hearts, but this event also ensures the Auchincloss name will be part of Dickeyville history and folklore as part of our annual celebrations!