Our new neighbor Deborah, got an early start on a peripatetic lifestyle as her family followed her father’s career. First in the military, then in radio (he worked for WFBR when the station was home to the Orioles broadcasts).  They routinely changed residences from Germany to various cities along the East Coast. 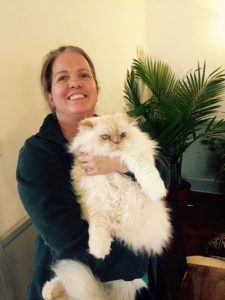 Deborah is proud that she can still name the record 11 schools she attended in 12 years, including a year each at Towson and Hampton Elementary schools, Notre Dame Prep, Dumbarton Jr. and four years at Towson High School. The imposed, archaic structure of Notre Dame Prep was a failed experiment, but allowed Deborah to join the public school ranks and pursue her passion for languages, specifically Russian.

Her unique upbringing and love of exploring cultures and learning languages naturally led to a nomadic adult life, living and working abroad after she graduated from American University.

Before purchasing her first home in Dickeyville, Deborah had 24 different addresses and she can still remember all of them! Her longest stint in one place was nine years she lived in Dubai before returning to the U.S. in 2011 with her loyal companion Buddy Love.  Buddy is a Himalayan Persian rescue cat from Dubai and no, the cat’s name is not a Nutty Professor reference; Buddy is because he’s her dear friend and Love was coined by a friend who said he looks like a disco cat with leg warmers when he gets his annual lion cut.

Most recently, Deborah was renting a small townhouse in Parkfairfax, a historical neighborhood in Alexandria, Virginia. When her landlady decided to sell, Deborah realized she was ready to buy a home, but wanted more than 825 square feet.

A search for homes in historic neighborhoods took her to several spots around Baltimore but nothing felt right until she drove into Dickeyville.

The Pickwick home was “love at first sight” and her purchase was apparently “meant to be”, as it followed on the heels of a previous failed contract.

The home affords plenty of spaces for Buddy Love to find suitable napping spots and affords Deborah the luxury of different rooms to accommodate different moods.

The house is in good shape and mainly needs some new paint especially in the kitchen. Deborah feels quite settled here and thinks she might stay awhile!

Deborah’s current job, working for a healthcare public relations agency, is located a couple of blocks from Union Stations in DC so she has become a devoted Marc train rider. Her favorite way to pass train time is people watching – with an ever changing panoply of characters on offer daily. Friends benefit from a text message stream of witty and insightful observations.

As for hobbies, clearly Deborah loves traveling! She is also a bit of a foodie. Two shelves of her library have just cookbooks! She loves to cook- especially breads and soups- and to explore the offerings in random ethnic grocery stores.

FYI- She has offered to lead a guided trip to the nearby Russian market as well as the H Mart.

She also loves photography, reading (can’t wait to visit the library again!), antiquing and furniture refinishing. She keeps up her Russian language skills by regularly skyping with friends in Moscow.  (How many people can claim that as a pass time?)

Deborah is a delightful, outgoing and sociable person. She is thrilled that her nomad years have seen her plant roots in Dickeyville.