Alert: Pokéman comes to Dickeyville – but do not fear!

A new plague has swept across the nation… and Dickeyville. Perhaps you’ve seen a carload of shifty-looking twentysomethings cruise slowly up Wetheredsville, stopping for a moment in front of the church. Or perhaps you’ve seen people hanging out up by the trailhead, staring at their phone screens, trading arcane slang terms like “squirtle” and “weeble”, and complaining about “server outages”, whatever those are. Around the country, impressionable youth have fallen sway to a new all-consuming passion. Not drugs, or crime, or backtalking their elders, but something far worse: Pokémon Go. And not even idyllic Dickeyville is safe. At great personal risk, I went undercover into this terrifying new youth subculture to report back to you, and I can tell you this much: Pokémon are everywhere. For all you know, a wild Wartortle might be sitting on your shoulder right now.

I’m a bit older than the Pokémon generation – Mario and Sonic were the cutting edge when I was growing up – and I’d never played a Pokémon game before. When I learned that Pokémon Go was coming out last week (from either my sister or sister-in-law, I don’t remember which mentioned it first) I had no inkling of the peril it held for our society. It wasn’t until my mother sent me an article on the Pokémon Go phenomenon directly from the epicenter of youth culture – namely, National Public Radio – that I realized that this particular cultural phenomenon wasn’t going to be easy to escape.

But what is Pokémon Go? The short answer is that it’s a mobile game, and while it does contain some pretty angry birds, it’s unlike most mobile games made to date in that it’s intimately tied to the real world. Every square inch of our world is recreated in Pokémon Go: it uses the phone’s GPS to place you on a mostly-accurate street grid. Scattered throughout the landscape are permanent landmarks – called Pokéstops and Pokégyms, about which more later – and, more importantly, millions of tiny monsters, the eponymous wild Pokémon. Even as we speak, there might be a Pidgey on your TV or a Rattata on your fritatta. But only the players can see them, thanks to the augmented reality mode of the game, which uses the phone camera to display the Pokémon in relation to the real world. The players are monster trainers, trying to capture as many of these wild Pokémon as possible and train them up into an elite fighting force.

And there are a lot of players, more than anyone anticipated – the app’s servers are struggling mightly to keep up with them all. All around the world, people are putting on imaginary stupid-looking hats and stupider-looking pants, donning their imaginary backpacks, and setting off in search of monsters large and small. Although the game is free, and in-app purchases aren’t at all necessary to enjoy the game, it’s not only the most downloaded app in both the Android and Apple stores, but also the most lucrative: right now it’s bringing in $1.6 million a day, and has been credited with bumping Nintendo’s stock price up by 10%. Pokémon Go is not the first game of its type – it borrows heavily from the 2012 game Ingress, created by the same developer – but it is the first to become such a massive cultural pheonomenon. 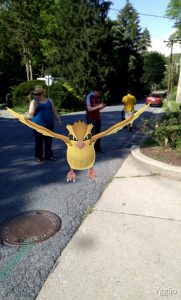 How does all this relate to Dickeyville? Well, it turns out our little village is one of the better locations in the area for Pokémon-hunting. For one thing, Dickeyville is in a unique location, surrounded by water, parkland, and urban environments, all of which tend to yield different types of Pokémon. For another, we’ve got a pretty dense collection of landmarks for our size. Dickey Memorial Presbyterian Church, the Odd Fellows Hall, Ashland Chapel, and the Gwynns Falls trailhead have all been turned into Pokéstops (locations where players can replenish their supplies), and both the sign by the bridge and the sign about Dickeyville’s history at the intersection of the Gwynns Falls Trail and Windsor Mills have been turned into Pokégyms (locations where players can station their strongest monsters to fight others). Last I saw, the bridge gym is controlled by Team Mystic (our family’s team) and the trail gym is weakly controlled by Team Valor (one of the two opposing teams), but that will surely change as soon as I can get around to walking down there.

Yes, that’s right: at some point today, I will probably walk two miles in the heat, just so I can set one imaginary monster to fight another. And that’s the thing… I’m not alone. Right now, all over Baltimore and all over the country, young people are walking, biking, hiking, and taking mass transit – not to save the earth, but to find computer-generated monsters. (Not that the game is exactly an environmental triumph, given that, by my conservatively estimates, keeping one’s phone battery from dying while playing requires about 1.21 gigawatts of power.) It turns out that all we ever needed to get off our duffs was Pokémon this whole time!

So if, in coming days and weeks, you see people wandering the streets of Dickeyville, standing outside our landmarks, pointing their phone camera at nothing in particular, or crying out in anguish about about the Clefairy that got away, don’t call the police. These aren’t would-be burglars, they’re just regular people out hunting digital game. Be kind to them… at least until you figure out what team they’re on. If they’re not on Team Mystic, though, feel free to call the police. We’ve got to keep our gym safe somehow.

About the author Martin Sherman-Marks