A Brief Description of the Residents of Wetheredville as of June 1, 1880

By Seely Foley
What was Dickeyville like in 1880? A careful study of the census taken for the town in that year gives a snapshot in time of what was called the village of Wetheredville [1]. The enumeration for the village covers seven pages and lists each resident by name, age, occupation, origin and a few other miscellaneous questions. Unfortunately, information regarding which residents owned their homes and property is not available in this census. 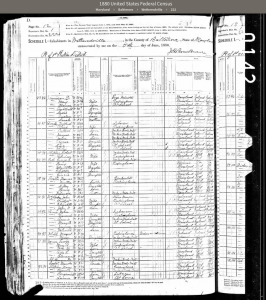 There were 316 residents and 58 households as of June 1 in 1880. The majority of Wetheredville’s residents were born in Maryland with parents also born in the state. The Irish, mostly identified as laborers, formed the largest group of foreign-born residents. Three of the Irishmen, however, had unique occupations for Wetheredville. John Murphy was the only farmer living in the village, and fathered a large family of eight children, all born in Maryland, ranging in ages between 10-21. Six of his oldest children worked in the local mills. John Coulter was a retail grocer who lived in the village since at least 1856 when he bought property from Charles Wethered. This property included a general store with a covenant on the deed restricting the sale or manufacture of intoxicating liquors [2]. John McCabe was the only stonemason in the village.

Another interesting foreign-born family were the Ashworths. The parents and eldest children were born in England while an 11 and 14 year-old were born in Maine. The eldest daughter, Amelia, was still attending school at age 21. This was very unusual; perhaps she was in college. A nephew, who was a carver and guilder, also lived with them.

Most of the households in the village appear to be typical nuclear families with a father, mother, and children. The families usually had about six children. The Peddicords were the largest family, with nine children. There were only nine people living in the village identified as boarders living with non-relatives. No one in the village lived alone, but there were eight households with only two people. The oldest resident of the village was Annie Heilton. Her age was listed as 72 and she lived with her husband who was still working as a watchman at the woolen mill at age 69.

Eleven of the village households were headed by women. Many of these women were widows. The census identifies 13 women as widows and only 2 widowers. Eight of these widows were older than 50, and two were in their 20s. Martha Engle was 29 years of age and raising four children ages 2 to 14. Her 14 and 11 year-olds were already at work in the woolen mill. The only African American family in the village was also headed by a woman, Liza Jane Cley. Liza Jane was the mother of four children between the ages 12 and 19. Liza and her three oldest, all boys, could neither read nor write, but the youngest daughter was attending school. This was a time when schools were segregated so she would not have attended the village’s school.

This census was the first one where citizens were asked questions about their attendance at school and their ability to read and write. The number of persons older than ten years of age who could not read was 31. There were more villagers who couldn’t write with 45 people in this category. The majority of the illiterate persons were older women.

Another column was marked for children attending school during the census year. An examination of the ages of the students gives the impression that schooling did not begin until age 9 and was not mandatory in 1880. There were 31 children listed as “at school.” Most of these students were aged 12, but you can tell children were not required to attend school, because there were also five children of the same age already at work in the woolen mill. Two mill workers were only 11. All together there were 34 young girls and boys working in the woolen mill who would have been in school during our present time.

The Rev. D. Jamison was the village’s Presbyterian minister, who would soon be involved in building the new church of that domination. Mr. W.J. Dickey, age 65, was listed as a manufacturer of woolen and cotton goods. He lived with his wife; his son, who was a clerk in the mill; his 6 year-old niece; and two servants. The only other resident of Wetheredville with servants living in the household was the other retail grocer in the village, B. F. Campbell. He and his wife were both 39, and had a boy aged 8 and a baby. The servant was a girl aged 14. This household also listed Katie Franton, working in the woolen mill, as a boarder.

A visit to Wetheredville in 1880 would find an active, prosperous village with steady employment for the villagers. There were two stores to meet villager’s needs and a horse-drawn railroad within easy access for the five-mile trip to Baltimore.

Blog Author – Seely Foley and her son Kyle moved to Dickeyville in 2015 from rural Frederick.  She is a retired social studies teacher with a fascination for genealogy and enjoys, quilting, crocheting and gardening.   Seely recently became Vice President of Dickeyville’s Garden Club.

Editor’s note: In effort to better know her new neighborhood, Seely delved into Dickeyville history by analyzing US Federal Census data recorded during the late 1800s. We hope you enjoyed this census interpretation of previous families in Dickeyville around 1880 (then known as Wetheredville).

The 1880 census data can be accessed via:

About the author Seely Foley